Traditional woman's costume of the Philippines, consisting of a blouse (baro) and skirt (saya)

The baro’t saya or baro at saya (literally "blouse and skirt") is a traditional dress ensemble worn by women in the Philippines. It is a national dress of the Philippines and combines elements from both the precolonial native Filipino and colonial Spanish clothing styles.[1] It traditionally consists of four parts: a blouse (baro or camisa), a long skirt (saya or falda), a kerchief worn over the shoulders (pañuelo, fichu, or alampay), and a short rectangular cloth worn over the skirt (the tapis or patadyong).[2]

The baro't saya has multiple variants, including the aristocratictraje de mestiza (also called the Maria Clara or Filipiniana); the Visayankimona with its short-sleeved or poncho-like embroidered blouse paired with a patadyong skirt; as well as the unified gown known as the terno, and its casual and cocktail dress version, the balintawak.[1] The masculine equivalent of baro't saya is the barong tagalog.[3]

Baro't saya is a contraction of "baro at saya", literally meaning "blouse and skirt", from Tagalogbaro ("shirt" or "clothing") and saya (from Spanish "skirt").[4]

Baro't saya is an ensemble that traditionally consists of four parts: the blouse (baro or camisa), a long skirt (saya or falda), a kerchief worn over the shoulders (pañuelo, fichu, or alampay), and a short rectangular cloth worn over the skirt (the tapis or patadyong).[2]

Baro't saya evolved from two pieces of clothing worn by both men and women in the pre-colonial period of the Philippines: the baro (also barú or bayú in other Philippine languages), a simple collar-less shirt or jacket with close-fitting long sleeves;[5] and the tapis (also called patadyong in the Visayas and Sulu Archipelago, and malong in Mindanao), a short rectangular or tube-like cloth worn wrapped around at waist or chest-height and secured with belts, braided material, or knotted over one shoulder. Women also usually wore bracelets over the baro.[6] These types of clothing still survive in non-Christianized groups in the Philippines.[5] 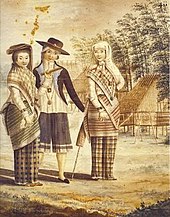 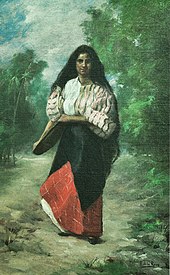 Filipina, a 19th-century painting of a working-class woman in baro't saya by Fabián de la Rosa

The Spanish clergy during the colonial period deemed the precolonial mode of dress as immodest for women and introduced the long skirt (known by the Spanish name saya or falda) to be worn under the tapis. In the Visayas, the patadyong was tolerated for longer, although it was eventually also replaced with the saya in the 19th century.[5][7][8]

By the late 18th century, the traditional everyday wear of women in the Philippines consisted of two basic pieces of clothing known as the pares ("pair"). This consisted of a saya reaching up to the ankles (usually checkered) and a collar-less baro or camisa (usually plain). The name pares was more closely associated with the skirt, which unlike later saya were narrow and sheath-like, resembling precolonial tapis. They were secured at the waist by strings and had wide, flat pleats along the waistline held together by pins. The baro was more or less identical to precolonial baro, with long narrow sleeves. Like later ensembles, these two pieces of clothing were usually complemented by a tapis (which was now worn as an overskirt) and a kerchief around the shoulders known as the pañuelo, fichu, or alampay (made from the same opaque material as the skirts).[5]

The fabrics used for early sayas were usually native textiles (particularly textiles made by highlander Visayans in Panay). Later on in the 19th century, they began to use similar imported textiles, most notably the cambaya imported from India.[5]

The narrow width of the 18th-century paressaya, however, made them impractical for everyday life. By the 1820s to 1840s, the saya was replaced by a billowy western-style skirt known as the saya a la mascota. For women of the upper classes (principalia), they were usually ankle-length; while for women in the lower classes, they usually reached down to mid-calf to facilitate freer movement while working. Knee-length versions were also allowed for young girls.[5]

Designs and elements of the dress also later diverged sharply between the lower classes and the aristocratic Principalia classes from the mid-19th century onwards. The tapis for example, which was unique to Philippine women's attire, became much shorter between the 1840s to the 1860s. Due to this, they became more restricted to the native indios, while Spanish women and some mestizas avoided wearing it because of its resemblance to the delantal (aprons) worn by servants. This dichotomy was depicted in José Rizal's novel Noli Me Tángere where the mestiza protagonist María Clara wore a tapis and a baro't saya, while the pretentious Doña Consolación (a native married to a peninsular) wore European-style dresses without the tapis.[5]

The national costume of the Philippines, the baro’t saya, is an elegant hybrid of Filipino and Spanish clothing styles. The term itself comes from the Tagalong words "barot at saya" or "blouse and skirt," still the basic components of the ensemble. Made of pineapple cloth, the indigenous textile of the Philippine Islands, the silhouette of the garment relates to traditional Spanish costume, particularly in the cut of the sleeves, the shawl collar and trailing skirt. During the period of Spanish colonization, the baro't saya was the everyday dress of most Philippine women. Although everyday ensembles were far less ornate, the blouse component was usually more decorative than the skirt. Slight differences in the decoration or style of wearing the baro’t saya provided a means of distinguishing members of various social strata.

This artwork is meant to be viewed from right to left. Scroll left to view more.

Due to rights restrictions, this image cannot be enlarged, viewed at full screen, or downloaded.

Due to rights restrictions, this image cannot be enlarged, viewed at full screen, or downloaded.

The Met Collection API is where all makers, creators, researchers, and dreamers can now connect to the most up-to-date data and images for more than 470,000 artworks in The Met collection. As part of The Met’s Open Access program, the data is available for unrestricted commercial and noncommercial use without permission or fee.

A traditional gown worn by women in the Philippines

La Bulaqueña, an 1895 painting by Juan Lunasometimes referred to as "María Clara" due to the woman's dress 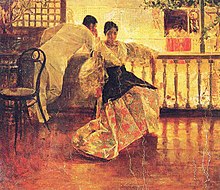 Tampuhan("Sulking"), an 1895 painting by Juan Lunadepicting a Filipina in traditional traje de mestizadress. Believed to be the same woman as in La Bulaqueña.

The María Clara gown, sometimes referred to as Filipiniana dress or traje de mestiza,[1][2] is a traditional dress worn by women in the Philippines. It is an aristocratic version of the baro't saya. It takes its name from María Clara, the mestiza protagonist of the novel Noli Me Tángere, penned in 1887 by Filipino nationalist José Rizal. It is traditionally made out of piña, the same material used for the barong tagalog.[3]

A unified gown version of the dress with butterfly sleeves popularized in the first half of the 20th century by Philippine National Artist Ramon Valera is known as the terno,[4] which also has a shorter casual and cocktail dress version known as the balintawak.[5] The masculine equivalent of baro't saya is the barong tagalog.[6] 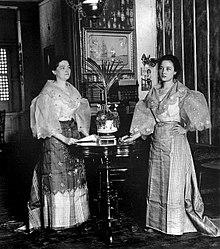 The Maria Clara is a form of baro't sayabut traditionally worn by Filipina women with a pañuelo(neck scarf) over the shoulders and accessorized with a delicate abaniko(fan).

Like the baro't saya, the Maria Clara gown traditionally consists of four parts: a blouse (baro or camisa), a long skirt (saya), a kerchief worn over the shoulders (pañuelo, fichu, or alampay), and a short rectangular cloth worn over the skirt (the tapis or patadyong).[7]

The camisa is a collarless blouse whose hem is at the waist and is made from flimsy, translucent fabrics such as pineapple fiber and jusi. The sleeves of the camisa are similar to the so-called "angel wings", or shaped like bells. The correct term for the sleeves of the camisa during the mid to late 1800s is a "pagoda" – derived from early Western silhouettes of the Victorian period.[8]

The pañuelo is a piece of starched square cloth (either opaque or made from the same material as of the camisa) folded several times and placed over the shoulders. The purpose of the pañuelo has been related to modesty, used to cover the nape and the upper body due to the camisa's low neckline as well as its sheer translucency; and also doubles as an accent piece because of embellishments added to it, usually embroideries and the pin securing it in place.[citation needed]

The saya is a skirt shaped like a "cupola",[9] the length begins from the waist reaching the floor. These are usually comprised either of single or double sheets, called "panels" or dos paños (Spanish for "two cloths"); some examples are made out of seven gores or siete cuchillos (Spanish for "seven knives").[citation needed]

The tapis is a knee-length over-skirt that hugs the hips. Tapis designs may be plain, and is usually made of opaque fabrics such as muslin and the madras cloth, and also is used for the purposes of modesty as it keeps the lower body from showing due to the thinness of the saya.[3]

Some ladies belonging to the higher classes (often of the mestiza caste) consider the tapis a lowly piece of clothing. It resembled the dalantal (apron) worn by the lower classes. The upper-class women of the 1880s to the 1890s wore an elaborate[8] version of the tapis that was tied around the waist with two strings. This was also referred to as a "dalantal" (apron).[10]

The word "terno" in Spanish refers to a matching set of clothes made of the same fabric. In the Philippines, "terno" refers to a woman's ensemble that consists of matching colors/patterns.[11] In the early 1900s, the traje de mestiza's components started to match in terms of color and patterns.[12] Some trajes in the 1910s were entirely made of the same material[citation needed] (such as "nipis" – a Filipino term meaning "fine" or "thin"[13]). By the 1920s the term referred to a dress consisting of a matching "camisa" with butterfly sleeves, a heavily starched "pañuelo" (fichu), a "saya" (skirt) which normally came with a "cola" (train), and a "sobrefalda" (overskirt).[12]

By the late 1940s, the terno's meaning and silhouette evolved into any Western dress with butterfly sleeves attached to it.[11]

Occasionally the "terno" would be referred to as a "mestiza dress" by women who lived in the first half of the 20th century.[12]

During July 8, 2008, State of the Nation Address of Philippine president Gloria Macapagal Arroyo, she wore a "modernized María Clara gown". The adaptation donned by the president came was fuchsia-pink, designed by JC Buendia. Created in three weeks, the fabric used for the presidential gown was a blend of pineapple fibers and silk and was developed by the Philippine Research Institute, an agency of the Department of Science and Technology of the Philippines. The six-yard fabric costing ₱ 3,000 were produced in the province of Misamis Oriental, processed in Manila, and woven in the province of Aklan. The cloth was then colored with a dye from the sabang, a native plant.[14]

According to the Philippine Daily Inquirer, this is the first time in Philippine history that the media office of the Malacañang Palace revealed details about a Filipino president's evening outfit that would be worn for a State of the Nation Address. However, the president herself talked about the attire she wore in June 2008 during the 50th anniversary of the Department of Science and Technology. The aforementioned outfit was an old-rose-colored dress from pineapple fibers and dyed with materials originating from coconut husks.[14]

Now there are a lot of designers who are incorporating filipiniana dresses into their creations, adding a modern twist to them. They tailored it to be able to match up to today's ever-changing standards and the needs of everyday people.[15] Although its style has changed, the image of the classic filipina can still be seen.